Catching Up and Giving up the Cup

Yes, I know it's been an awful long time since last I blogged anything. I've been awfully busy, still with the baby and family. I've also been devoting a little more time when I can to my amateur radio hobby by either making contacts or working to improve my antennas.  Once I  have something I'm reasonably happy with, I may blog about that, too.

I've had to go on another hiatus with regard to my ninjutsu training as well. It's just not realistic to continue that when I have a one-year-old who still won't sleep through the night. A friend of our family rightfully refers to the early years of a child's life as "the Cave Years."  Hopefully once everyone's a little older and more independent, I will be able to start up again permanently.

Anyway, something that happened last week inspired me to write again, and that will be the main focus of this article.  On Friday, I spent several hours working on my antenna project. This involved climbing up and down off the roof, using ropes to lift a bunch of wires into the air with the help of some well-placed trees, a slingshot, and some 1.5 Oz lead sinkers - not to mention constantly fending off swarms of blood-sucking, bite-y sting-y bugs. Did you know mosquitoes come in two sizes here in Michigan? They're either small enough to crawl through your screen door, or large enough to knock it off its hinges and drag you into the woods.

After this antenna work, I was pretty worn out - it was a pretty good workout. I slept really well that night, and the next day I started to feel like utter crap after being awake for a few hours. I felt run-down, exhausted, weak, and completely lethargic. To top it off, I got the mother of all headaches that just wouldn't go away, in spite of taking a bunch of ibuprofin and drinking lots of coffee - the two things that usually help me with that. This was Saturday. Sunday was even worse. My headache never went away and kept me awake most of Saturday night - that is, when Isabel wasn't screaming for attention. I don't remember much of Sunday, other than it was bad. At one point, I felt like I was going to be sick and needed to lay down. I went to bed early, and felt even worse in the morning.

Monday morning was, thankfully, Labor Day, so I didn't have to go to work. I dragged my exhausted body out of bed at about 8:30AM and began to make my morning cup of coffee when something on the K-cup box caught my eye. It was one word - "Decaffeinated."

As it turns out, my wife had bought the box on Friday because it was on sale and  hadn't noticed that it was decaf. Suddenly, it all made sense - I had been going through caffeine withdrawals the whole weekend! Fortunately, we had some of the real stuff, too, so I made myself a cup of that right away. Of course, as soon as I had some caffeine back in my bloodstream, I felt a thousand percent better. My energy level was back to normal, the nausea went away, the headache disappeared, and I realized that I am most likely physiologically addicted to caffeine.

So, I've decided to quit caffeine altogether.  I've heard people who have done this often feel much better and have more energy after their body recovers from the addiction, so I'm hoping that will be the case for me, too. Now, understand that I don't drink that much to begin with. I usually have a 10Oz cup three times a day, plus a diet soda with lunch.  Still, it's amazing how hard the withdrawal symptoms hit me! I think if Al Qaeda or ISIS want to really screw America over, they should disrupt our coffee supply - we'd all be too tired and worn out to respond!  I certainly know that if the zombie apocalypse happens, and I have to quit coffee cold-turkey, I'd have a hard time functioning.

Therefore, I've decided I'm not going to quit cold-turkey. Rather, I'm going to gradually wean myself off of it. I've already given up the lunchtime soda and my afternoon cup, and I haven't noticed any ill effects. I still have two cups first thing in the morning, though. I'm going to give myself a few more days like this, and then see about spreading those two out, shrinking their size, and eventually eliminating them and drinking more water instead.  For now, though ... 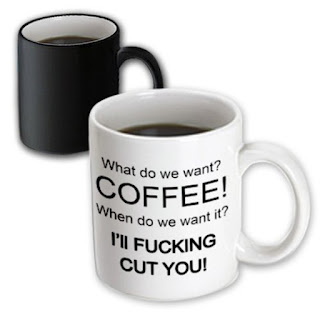