Jury Duty and the Duty of Jurors

Yesterday, I received the "dreaded letter" in the mail - a summons to report for Jury Duty. This is the second time I've been summoned this year. The first time resulted in me being seated as a juror and delivering a verdict in a civil trial. 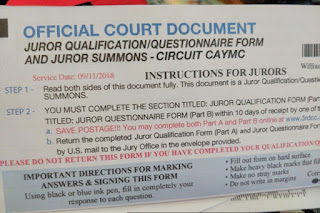 My first service as a juror was in federal court and dealt with corporate negligence vs a family who had lost their child, ostensibly because of said negligence. It was a very difficult case on an emotional level. Besides having a great deal of empathy for the family, and feeling their loss deeply, I think the worst part of it was not being able to talk about it at all with anyone - not even my wife - while the evidence was being presented. It took a lot to keep it all inside, and at the end of the two-ish week trial, I was emotionally exhausted. While I'm glad to have had the experience, I'm not exactly chomping at the bit to do it again.

This time, I've been summoned for a Michigan state court. Of course, I have no idea if I'll get picked again or what the case will be about, and even if I did, I couldn't discuss it at all. However, at this point, all this jury duty stuff has driven me to blog about an aspect of it that I think is very important, but not very well-known: the right of jury nullification.

Judges and prosecuting attorneys really don't like jury nullification. They rarely, if ever, inform jurors of the right. In fact, most of the time they will tell jurors that they do not have the right and must find solely based on the facts of the case.  This, however, is not entirely true. 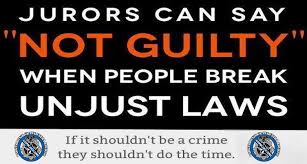 For example, a sympathetic jury could acquit a person accused and obviously guilty of stealing food to keep his family from starving to death - this would be an instance of a just law being applied un-justly to the defendant. For another example, a jury who disagreed with marijuana prohibition laws could acquit the guy caught "green handed" with a bag of weed. In this way, juries - composed notably of randomly selected, ordinary people - stand in judgment over the laws and activities of the state and the exercise of its power. 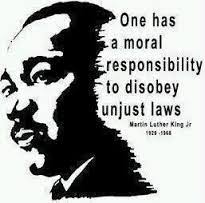 In my mind, this makes the right to trial by jury, the right and duty to serve on a jury, and the right of jury nullification some of the most important safeguards of liberty we, the people possess. It's also probably the same reason our government doesn't want us to know we have them. I'm not even joking about this - people have actually been arrested and thrown in jail for nothing more than distributing copies of the US constitution and pamphlets on jury nullification to potential jurors on their way into the courthouse. These actions by the state are in flagrant violation of the right to free speech, among other things, but far too few seem to care. It's getting pretty scary out there, folks.


So, my dear readers (yes, all 12 of you, ha ha), you may now consider yourselves informed. If nothing else, it may provide you with an easy way to get out of jury duty if the case is a criminal one and involves a controversial law.